Did you know that 2.25 billion cups of coffee are consumed around the world everyday? And that makes coffee the second most valuable commodity which is legally traded in the world, after oil.

Also, coffee is the 2nd most popular beverage in the world, second only to water.

Coffee has created its significant mark in our lifestyle. History of coffee itself is a grand story on its own.

Coffee is not just another beverage that you drink and forget. Coffee itself has given rise to a culture and lifestyle.

Starting from helping to make you feel better to help you complete your homework or office project -coffee is always there for you.

Coffee came a long way and the history of coffee might be something pretty interesting to know.

Take a cup of coffee, feel the aroma and warmth, and let’s have some fun knowing the history and present aspect of coffee in today’s world.

Origin Of Coffee: The History Of Coffee With Stories

There are few stories related to how and where coffee originated, where do coffee beans come from, but none of them can be verified to be a hundred percent accurate. Out of all those stories, two of them are most common and widespread. Let’s talk about those.

During the 9th century (around 850AD), in the region of kaffa – Ethiopia, a man named Kaldi noticed his goats became more active and energetic as they ate berries from certain plants.

He tried some of those berries himself and felt the energy. Then he decided to take the berries to his nearest monastery. The head monk threw them away in fire as he was intimidated by their effect.

Afterwards, he was captivated by the aroma that spread from the fire. As the fire got out, he collected those beans and grounded them to add to water. And that is how the first ever cup of coffee was made.

By the way, do you know how to grind coffee beans without a grinder? We also have detailed articles on the best burr coffee grinders then the best coffee grinder for French press and how to clean a burr grinder, in case if you want to check those out.

This one originates from ancient Yemen. Omar had mysterious healing powers and for some reason, he was banished from his community. He had to survive in a desert cave. He was hungry and looking for food. He ended up eating red berries that he found, but they were bitter in taste.

To make it better, he ended up roasting the beans and grounding them to add in water, which produced a liquid that gave him the energy to survive. He survived there for days and when the community learned about his mysterious survival, he was called back to join the community.

Both of these make good stories, however, the credit for the first cup of coffee goes to both Ethiopia and Yemen. The coffee plant is native to Ethiopia, while the first-ever evidence of roasting and grounding coffee beans was found in Yemen.

Some people claim that the word “coffee” came from the word “Kaffa” which is a province in South west Ethiopia. However, Wikipedia tells us something else.

The word “coffee” came as an English word from the dutch word “koffie” in 1582. The Dutch got it from the Turkish word “kahve” which came from the Arabic word “qahwah” – meaning some type of wine.

We also have a detailed article on how to make Turkish coffee authentically, in case if you want to check that out.

Spread Of Coffee Around The World
(History Of Coffee Timeline)

Arab- Those Who Spread The Coffee

Arabs were responsible for spreading the coffee blessing all over the world. It all started around 13th century. The Sufis in Yemen used to drink coffee in liquid form which they believed helped them to stay awake and pray and worship till late night.

(By the way, do you know how to make strong coffee that keeps you awake?)

During the 15th century, the first coffee houses began to pop up in Mecca, and they were known as qahvehkhaneh. The coffeehouses were places for intelligent people to gather and debate and discuss all sorts of topics and issues. Coffee was widely accepted in the Muslim community.

Since people from all over the world came to Mecca for pilgrimage, the words and practices about Arabian wine slowly spread everywhere.

During the 17th century, coffee eventually made its way to the Europe. However, since it was rooted in the Arab community, the Christian majority Europeans had their suspicion and called it the invention of Satan or the devil’s drink.

Somehow, during 1615, Pope Clement VIII intervened and wanted to try it for himself before abashing it instinctively. He tried it and was taken aback by the taste that he approved of it. However, he baptized coffee and claimed it Satan free, so that people do not fear accepting coffee in their community.

Interestingly, coffee houses in Britain were called “penny universities”. It is where the intellectuals came to socialize and get a cup of coffee for a penny.

America Changed The Game (History Of Coffee In America)

The new world got introduced to coffee mainly by the British during 17th century. Coffee was not instantly popular in America, since tea was the real hotshot back then.

However, coffee got a breakthrough in America after the famous Boston Tea party revolt in 1773. Somehow drinking tea became unpatriotic to the Americans. They needed something of their own. Hence coffee quickly gained popularity and spread fast.

People understood the rise in value for coffee and started its cultivation and business all over. After the war, instant coffee was introduced by G. Washington, although the first invention credit goes to Satori kato – a Japanese-American chemist.

The modern-day Coffee was finally widely and commercially spread by Starbucks as they started in Seattle in 1971. And you know the rest.

The driving force of productivity is coffee for a lot of people, and then there are people who can’t even imagine mornings without a cup of coffee.

Coffee helps to socialize, brightens up a gloomy day, and helps you stay awake and finish the loathing office or schoolwork.

Some of the most popular coffee around the world are cappuccino, espresso, americano, macchiato, mocha, latte, and regular black coffee.

Starbucks can be recognized as a powerful agent in popularizing coffee in the modern world. They have 31,256 stores around the world as of 2019, and they are still growing. Starbucks coffee is loved and appreciated across the globe.

There are 4 main types of coffee beans available around the world. Although there are more, these 4 are the most common and popular ones.

These beans are not easy to cultivate. They are delicate and take years to grow, but they are sweeter and generally the most preferred taste all around the globe.

These beans are also quite popular and they are comparatively easier and faster to grow. The taste is slight on the stronger and harsher taste. Most of the grounded coffee you can buy from the supermarket are usually robusta beans.

Smoky, nutty, and floral are the words to describe the taste extracted from these beans. Liberica beans are quite rare since they need a specific climate to grow. They are mostly grown in West African regions.

Native to Southeast Asia, these beans are quite rare as well. These beans taste resembles a bit sour and fruity. It is popular among those who look for a unique coffee taste experience.

[We also have detailed articles on what is caffeine and how much caffeine is in a cup of coffee, then on coffee roast levels and on the best home coffee roaster, in case if you want to check those out.]

Brazil has been the largest coffee producing country for a long long time, and it doesn’t seem that anyone else is suddenly going to change that. They have been the largest coffee producer for more than 150 years. Brazil produces 2,590,000 metric tons of coffee a year as of 2019 which is 40 percent of the world’s coffee supply. Their climate makes it ideal for coffee plantations.

Second to Brazil is Vietnam (1,650,000 metric tons), followed by Colombia, Indonesia, and Ethiopia.

The World’s Most Expensive Coffee Is From Cat Poop

Kopi Luwak is the most infamous coffee that a lot of you might have heard of. Indonesian native cat like animal, locally named – toddy cat, eats the freshest coffee cherries and poop out the coffee beans after they are naturally fermented in its digestive system.

The beans are then collected, cleaned, roasted, and brewed to make an amazing and most expensive cup of coffee.

The award for being number 1 coffee consumption per person goes to Finland. They do love coffee and the statistics totally agree to that.

On average, a person consumes 26.45 lbs per year. Surprisingly, the actual number of a regular coffee drinkers in Finland is much higher. The average game includes the children and not so much of a coffee drinkers as well.

Let’s Watch a Video Review: The History of Coffee

When Is The International Coffee Day?

Legends say that coffee originates around the 9th century in Ethiopia and Yemen. Then coffee got popular in the Arab community and was very popular during 15th century in Mecca and other regions. Slowly coffee spread to Europe, Asia, and then to the New World by the British. On the other hand, modern-day coffee culture is hugely impacted by Starbucks and America’s love for coffee.

Why Is Coffee Known As Joe Or A Cup Of Joe?

Joe means common man, and coffee is said to be a common man’s drink, and that is why coffee is also known as “a cup of joe”. Although there are other stories as to why we started calling coffee to be joe, this particular one seems more logical.

Why Is Coffee Known As Java (Coffee Slang)

Another nickname for coffee is Java. It is named after a particular origin of coffee; there’s this island named “java”. But in the modern world, we do not mean coffee from java island when we say java, we simply mean “coffee”.

Why Is Coffee Healthy? (Coffee Benefits)

Coffee and caffeine sound complementary, but coffee is so much more than that. Coffee has antioxidants and other active healthy substances that have proven medical benefits. On the other hand, the aroma, warmth, and freshness that coffee brings to the table is plenty of positive support for your mental health and well-being. However, like anything else, too much coffee ain’t good for you as well.

For details see our complete article on the benefits of drinking coffee.

What Is The Coffee Belt? (Bean Belt)

Coffee requires a certain environment to flourish. An ideal environment for coffee refers to rich soil where it rains a lot, and where the temperature is mild with the shaded sun. These types of areas are located between the tropics of Capricorn and Cancer, and that is what we call as coffee belt or bean belt.

When you are drinking a cup of coffee, you are not just sipping a heartwarming beverage, you are resonating with millions of people all around the world.

Knowing the history of the blessing named coffee will give an extra reason to fall in love with coffee all over again. 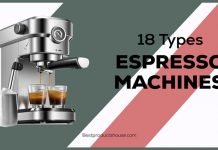 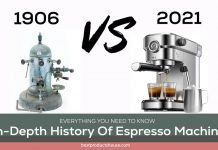 History Of Espresso Machine: Everything You Need To Know 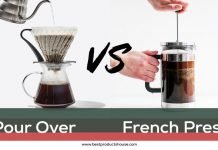 Pour Over Coffee VS French Press: Which One is Best for You?

BestProductsHouse.com is a participant in the Amazon Services LLC Associates Program, an affiliate advertising program designed to provide a means for sites to earn advertising fees by advertising and linking to Amazon.com.

*Amazon and the Amazon logo are trademarks of Amazon.com, Inc., or its affiliates.

Additionally, BestProductsHouse.com participates in various other affiliate programs, and we sometimes get a commission through purchases made through our links.